Below is a news article from the AP as republished by the Guardian: 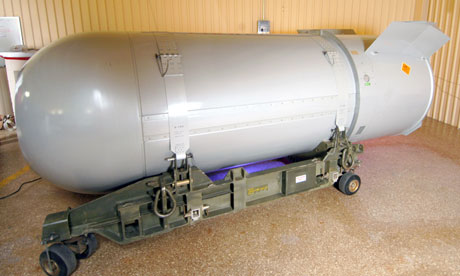 The United States’ last B53 nuclear bomb has been dismantled at the Pantex Plant just outside Amarillo. Photograph: AP

The last of the nation’s biggest nuclear bombs, a Cold War relic 600 times more powerful than the atomic bomb dropped on Hiroshima, has been dismantled in what one energy official called a milestone in President Barack Obama’s mission to rid the world ofÂ nuclear weapons.

Workers in Texas separated the roughly 300lb (136kg) of high explosives inside from the special nuclear material â€“ uranium â€“ known as the pit.

The work was done outside of public view for security reasons, but explosives from a bomb taken apart earlier were detonated as officials and reporters watched from less than a mile (1.6 kilometers) away.

The deputy secretary of energy, Daniel Poneman, called the disassembly “a milestone accomplishment.” The completion of the dismantling programme is a year ahead of schedule, according to the US Department of Energy’s national nuclear security administration, and aligns with Obama’s goal of reducing the number of nuclear weapons.

Put into service in 1962, when Cold War tensions peaked during the Cuban Missile Crisis, the B53 weighed 10,000lb (4,500 kg) and was the size of a minivan. Many of the bombs were disassembled in the 1980s, but a significant number remained in the US arsenal until they were retired from the stockpile in 1997.

The B53’s disassembly ends the era of big megaton bombs, said Hans Kristensen, a spokesman for the Federation of American Scientists. The biggest nuclear bomb in the nation’s arsenal now is the 1.2-megaton B83, he said. The B53 was 9 megatons.

The 1.5-kiloton bomb dropped on Hiroshima, Japan, at the end of the second world waer killed as many as 140,000 people.

The B53s’ size helped compensate for their lack of accuracy, Kristensen said. Today’s bombs are smaller but more precise, reducing the amount of collateral damage, he said.

Kristensen said the Obama administration should not boast too much about dismantling the B53 when its arsenal of active nuclear warheads has been reduced by only 10 in the past seven months and Russia’s arsenal has grown by 29. The two nations signed a treaty in December to reduce their arsenals.

Since the B53 was made using older technology by engineers who have since retired or died, developing a disassembly process took time. Engineers had to develop complex tools and new procedures to ensure safety.

“We knew going in that this was going to be a challenging project, and we put together an outstanding team with all of our partners to develop a way to achieve this objective safely and efficiently,” said John Woolery, general manager of the Pantex Plant near Amarillo, where the bomb was taken apart.

The plant is the nation’s only nuclear weapons assembly and disassembly facility. This was the first time in 18 years media were allowed into secure places there. Hallways in one building had pictures of nuclear blasts from tests hanging on the walls. Riding in a bus one could see areas in the 16,000-acre (6,500-hectare) facility, one of the nation’s most secure sites, where plutonium pits and other weapons materials are stored.

The B53’s pit will be kept there temporarily, Pantex spokesman Greg Cunningham said. Meanwhile, the remaining non-nuclear material and components will be processed, which includes sanitizing, recycling and disposal, the National Nuclear Security Administration said last fall when it announced the Texas plant’s role in the B53 dismantling.